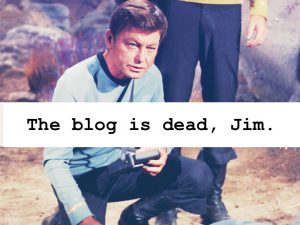 This is my second post about blogging and regrettably it’s about resuscitating a flat-out dead WordPress site. The ultimate cause is the mystery disappearance of the backbone of a WordPress blog, its database. Hopefully this doesn’t happen to you, but if it does, perhaps this post, which covers diagnosing the problem, and my next, which will cover how to fix it, can help.

The other day I decided to check out my blog after a year-long dormancy. I truly want to write more, so it’s time to start adding more content. It had been so long that I had to revisit my bookmarks to remember the admin site and how to log in. With anticipation I wanted to login, read what I had written to see how it stood the test of time, and start it up again.

THE BLOG IS DEAD, JIM!

I went to my site, and low and behold, nothing appeared except a nasty error message, “Error establishing a database connection.” I assumed this was something that could be easily fixed, especially because I consider myself fairly tech savvy. Not so savvy I can write a thesis about multithreaded C++ code, but modifying code here and there isn’t out of the question. Perhaps a path to the database needed to be updated.

The next step was to Google the error, then get into my admin page and fix it. My confidence took a dip when an attempt to log into the “wp-admin” portion of my WordPress site resulted in another error, “One or more database tables are unavailable. The database may need to be repaired.” Yikes! Fortunately, it provided a snipped of code to enter into my wp-config.php page to allow database repairs. That code is here:

A great page that discusses some of this is here, but my errors unfortunately couldn’t be addressed by its author’s worthy efforts.

After a little more internet searching I realized that something pretty bad happened to my database. The next step was to log into my cPanel at InMotion, where my site is hosted, and poke around. Regrettably nothing easy to fix stood out, and I simply didn’t understand how the site is put together well enough to know what to do.

The next step required a call to InMotion tech support. Fortunately, I wasn’t strapped for time because it took almost half an hour of hold music to reach a live person. That gave me more time to try to solve this thing on my own and save face, and time flies trying to solve problems. I want to give the person who took my call big kudos because he listened and legitimately seemed to get my frustration. I explained the errors and he put me on hold a couple times while he researched the issue. In the end, he had to tell me that my site was pretty much fried because the database simply didn’t exist. It was gone. I never backed up my site and there is no cache or trash can from which to recover it. It was wiped way at some point into the ether. The sound of his voice indicated he’s delivered this news before and that he was braced for a tongue lashing. However, I was in tech support many years ago, and I know there’s only so much the bearer of bad news can do.

“So, you’re telling me that my site is pretty much dead and there’s nothing to be done”

“Yessir. I am truly so sorry.”

I also know from being in tech support that angry users who have legitimate gripes can get some compensation. I asked him what could be done to keep me with InMotion given that through no fault of my own my site’s backbone (i.e. its database) disappeared, rendering it dead. He then told me that in January 2017, just last month, one of their data centers suffered a power outage which resulted in some data loss. I was most likely one of the casualties, and all the casualties who called received some free hosting. I was transferred to a customer service person and he kindly gave me six months of free hosting and reduced my renewal price by 15% for when it due in early 2018.

I don’t want to dig on InMotion. Sure one of their data centers had an issue, but I have no idea how much control they have over that. In light of the situation, they handled this professionally, and the two people I spoke with sounded legitimately sorry. Shit happens, move on. However, I will say I am extremely fortunate that my site is so minimal. A business site would be hurt much more than I. Though a team managing a business site should be smart and risk averse enough to create backups. I will do that going forward. Lesson learned.