As a music geek, one of my greatest anticipations going into fatherhood was influencing my daughter with all the wonderful esoteric and mainstream sounds I’ve acquired over the years. For me, music took hold at an early age, though I assumed it was that way for everyone. Only later did I realize I was one of those unfortunate junkies who can’t get enough and almost gets an endorphin rush from the perfect song at the perfect moment. I couldn’t wait to foster this in my daughter.

This is a story of my attempt to shape a little girl’s musical taste. She’s now an almost-seven-year-old who still likes some of what I force fed her, but she’s turning into her own person, and I couldn’t be prouder. Heck, Taylor Swift isn’t so bad. I still like the Partridge Family, so why shouldn’t I like contemporary teenybopper music? It all starts with what shaped her dad (that’s me) and then focuses on her progression from a toddler, who liked nearly anything played for her (Melvins? Bring it on!), to a big first grader who is now more influenced by her friends and her beautiful innate taste than she is by her dear old dad.

A vivid memory from around third grade is my parents purchasing a short stack of 45s at the View Acres grade school fundraising garage sale in Milwaukie, Oregon. The records were rubber banded together, their paper sleeves bent and torn, and I had no idea what I was in for. To this day, after wearing them out on my Fisher Price kids turntable, three of those records are still favorites. Whether they shaped me or simply found me is uncertain. Either way they hit a nerve that hadn’t been tapped before and that continues to need stimulation. 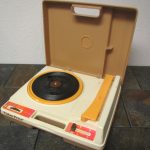 These weren’t kiddie songs. Their target audiences were older and I knew it. All of them hit hard, especially Travelin’ Band. It was fast and loud and John Fogerty didn’t sing, he yelled. It sounded primal, made me jump up and down, and I couldn’t play it enough. The Shocking Blue songs, especially Hot Sand, also hit the spot. Its fuzz guitar riff coupled with a sitar and the singer launching into the song the second the needle picked up the first groove made me move and play air guitar wildly in a room decorated with Bill Walton-era Portland Trailblazer newspaper clippings. This Diamond Ring embedded sixties garage pop into my psyche, never to leave, and hearing its melodic tune today invokes a combination of heart-tugging nostalgia and that feeling only the perfectly sweet pop song can bring out.

Around the same time our school choir sang Please Mr. Postman in the style of the Carpenters and Billy Don’t be a Hero, and they entered my tiny collection. I particularly liked the latter (the version recorded by the US band Bo Donaldson and The Heywoods, not the original version released a few months earlier by the UK band Paper Lace), with its military drum and flute march, cool fuzz riff, and story of a soldier headed to his untimely demise. My best friend and I acted out that war story while listening to the song, just like you’d expect a couple young unselfconscious boys would.

While my parents bought me that short stack of 45s, they bore no resemblance to what I heard in the rest of the house growing up. They may as well have given me a toy truck. It was just something to play with, not an attempt share their taste or to assimilate me into contemporary pop culture. The songs grabbed me on their own. As a parent, I wanted to be different and ingrain my kid with what I think is cool. In retrospect and in defense of my folks though, I’ve come to appreciate that John Denver, Cat Stevens, and Dolly Parton, who they inundated my sister and I with on the living room hi-fi in the 1970’s, all put out some pretty great records.

What would be my daughter’s Travelin’ Band and Hot Sand? I couldn’t wait to find out. I also couldn’t wait to shape and mold her into the perfect mix of music sophistication and low brow cool. “Eh, don’t put too much energy into it. She’ll like Katy Perry before you know it and there’s absolutely nothing you can do about it,” more experienced fathers told me. “Yeah, right,” I thought. This girl will be different. She’s mine and I will influence her. Just you wait.

From the moment Camille could stand on her own and bounce out a toddler dance I regularly boogied with her in our music room, surrounded by a wall of vinyl, after putting records on the turntable I thought she’d like, or perhaps better put, records I thought she should like. I showed her the record jacket, the vinyl, the band members on the inner-sleeve, saw her gaze in amazement at splatter and colored vinyl records, and soaked up her wide-eyed reaction. Like most kids, the beat moved her, and as far as I could tell, my plan was working. She started asking for The Kinks “One for the Road,” mostly because its spine is hot pink so stands out on the shelve surrounded by its neighboring records. I knew that like most girls she really liked pink, but it was for the music I told myself. She also took a liking to Girl Trouble‘s “Letter to Santa,” mostly because K.P Kendall sings, “I woulda wrote him a letter but I couldn’t spell ptthhhhthhth”, that last word being the sound made when you stick your tongue out and breathe out so it flaps between your lips and sprays spittle. I knew that that’s pretty funny to a three-year-old, but she was beginning to understand the simple rockin’ aesthetic of a garage band who’s been around three decades and who revels in their Tacoma, Washington identity while celebrating pop culture with their old zine, Wig-Out!, right?

She asked to see the record covers and asked who the individual members were and became familiar with the faces of the Beatles, Kiss, David Bowie, and more.

As we sifted through some of the more palatable sounds in my record library one band resonated beyond cool colors and funny sounds. The Jon Spencer Blues Explosion, with their indefatigable minimalist beat, melodic and punchy songs, and flamboyant singer, grabbed her. The album that she requested the most is Acme, which makes sense given it’s their peak of garage, dance, and soul. “I want to hear the orange one,” she’d say (not Orange, another JSPE album, but the album with the orange cover, Acme). She asked to see their record covers and asked me to quiz her on who each member is. She could point out Judah Bauer, Russell Simins, and 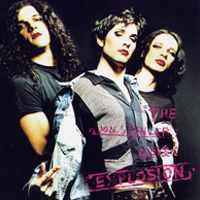 Jon Spencer on all their records, and particularly enjoyed pointing them out on the cover of Crypt Style because they’re dressed like girls. It wasn’t a one album love affair either. She dug Extra Width and Orange as well. I purposefully left out their earliest and rawest material. As great as that stuff is, that stuff probably isn’t particularly palatable to toddlers.

https://www.youtube.com/watch?v=AcOKE2qHs9c
More Camille favorites and adventure in parenting to come.